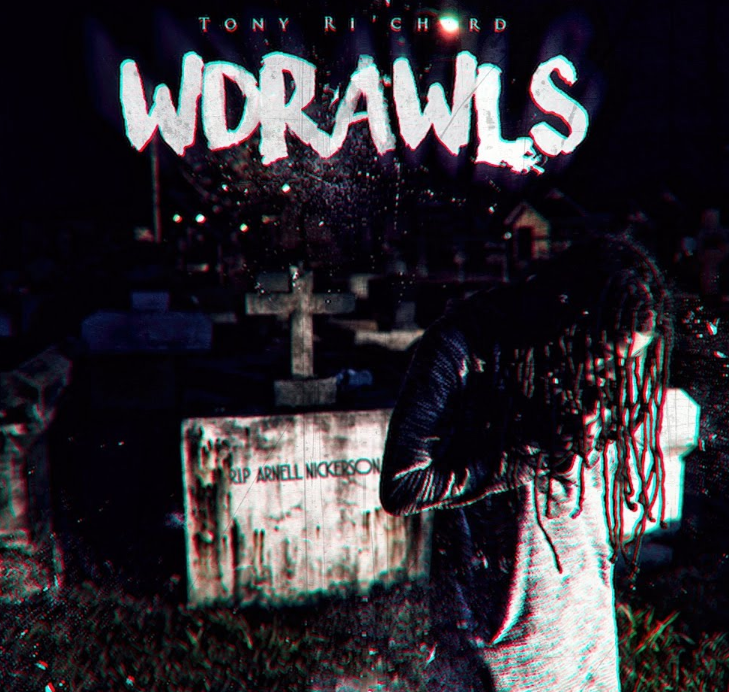 Evan – Tony Richard impresses consistently throughout WDRAWLS showcasing his smooth flow over chill beats while showing versatility with a few trap songs. All while touching on key issues in our world today. Definantly give this album a listen.

Nathan – WDRAWLS is a huge step in the right direction for Tony Ri’chard. Not a whole lot to complain about, the production has a really nice 90s vibe to it, which matches Tony’s flow perfectly. Lyrically, Tony showed off a lot of biblical knowledge and some very smooth rhyming ability. I really appreciated the themes of the album, as it dives into some tough issues in a way that the listener can understand. Tony does a solid job answering a lot of the tough questions he asks as well. Bottom line, WDRAWLS has smooth, but simple production that fits the themes and flows of the album nicely, Tony still has areas he can improve, such as the 2 trap songs on the album, but overall enjoyed this album very much as its a smoother listen and has high replay value.

Nathan – Tony Richard starts off WDRAWLS with a lighthearted song about his mom in heaven. As an intro it does a nice job introducing us to his 90s style production and his smooth flow.

Evan – Along the same lines as Letter From Heaven WDRAWLS has a chill beat as Tony drops bars about his own struggles that he goes through everyday.

Nathan – The Title track dives into Tonys shortcomings over another smooth beat. Nothing really sets this song apart, but still a nice song with good replay value.

Evan – Switching it up with a trap track Blood On The Cross is a heavy track production wise and lyrically. Enjoy.

Nathan – More of a trap beat for this song, the beat is solid, nothing too special. Lyrically has some good moments, like his different flow that’s shown off in this song.

Evan – The beat isn’t anything special but Tony has real quality rapping on this track. His flow and lyrics will have you playing this song over and over again.

Nathan – A song about struggles of a Christian, love the mix of some really thought provoking lyrics with a really nice beat and flow.

Evan – Featuring the best beat on the album so far Tony goes in hard where he is vulnerable about his own life where he talks about loosing his mom among other things.

Nathan – Tony opens up in one of the more honest songs you’ll hear in CHH. Personally my favorite song on the album, really pushes you to ask some deep questions. The production fits the lyrics perfectly.

Evan – The production and rapping isn’t on par with the rest of the album but the subject matter is important.

Nathan – Production picks up for this track, YG & Black goes into some of the racial tensions that our nation is facing right now. Tony goes harder than normal as he pleads with the listener to consider his perspective.


Oh Lord 7.25
Evan – Another trap track for the haters

Tony is hardcore and in your face on this one.

Nathan – Oh Lord is a solid song that would’ve benefited from some added Cadence switch up by Tony, as it gets repetitive after a bit.

Evan – Showcasing authentic lyrics with a impeccable flow over a J. Cole beat Tony delivers yet another great track.

Nathan – Heart of Louisiana goes into some of the deceptions in the world around us. Another song that challenges us to question the norm more.

Evan – Another laid back track but Tony’s flow is lacking in this one comparatively.

Nathan – A nice chill song about things that are good for your soul.

Evan – A storytelling song, Tony keeps up his good lyrics and flow.

Nathan – Production isn’t anything special, but the story Tony tells about reaching out to his friend to come to Christ is very well written and challenges the listener to reach out to their friends while they still can.

Evan – Reflections has a 90s vibe a strong message.

Nathan – Reflections does an excellent job explaining our need for redemption and how the bible still makes sense in the messed up world today. Also does a good job answering questions about the suffering around us from God’s perspective.

Evan – Another laid back beat Tony addresses current problems in our culture while maintaining his flow and lyrical realness.

Nathan – Tony touches on some really touchy subjects that most Christian rappers stay far away from, and he does it without sounding like the typical judgemental Christian so hats off to him for that. Should leave most listeners with a little to think about.

Nathan – A song about our flawed mentalities and our need for Christ to Renew our mind, seems like it was intended to be an album closer as the next song seems like a bonus track.

Evan – A song about his wife Tony continues to impress with his flow to finish up the album.

Nathan – A love ballad to Tony’s wife over a remixed Justin Bieber song. Not too notable, but accomplishes it’s purpose decently.